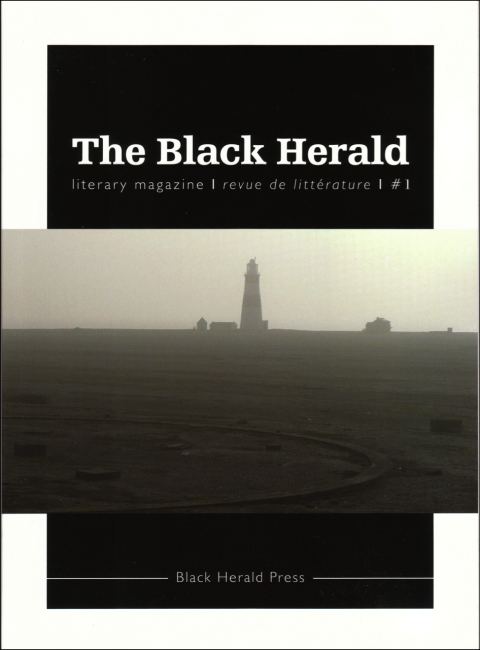 La nouvelle revue littéraire bilingue (anglais/français) The Black Herald qui regroupe de la poésie, des fictions courtes, des essais et des traductions accorde une place à deux des grands auteurs flamands d’expression française du passé (Georges Rodenbach et Emile Verhaeren) et à un poète néerlandais contemporain (Onno Kosters). Leurs poèmes sont présentés en version originale avec une traduction anglaise en regard. Co-fondateur du Black Herald avec Blandine Longre, le poète Paul Stubbs expose dans son « Éditorial » l’ambitieux projet du périodique qui fait l’objet d’une mise en page très soignée : « On July 2nd, 1914, the inaugural issue of Blast magazine was published in England, a project begun by the writer Wyndham Lewis, who hoped it would cement the reputation of the new ‘Vorticist’ movement - an English-speaking response to the new Italian avant-garde and futurist movement founded and preached by Marinetti. The editorial of this first issue of Blast declared: ‘‘Beyond Action and Reaction we would establish ourselves’’; and while our intent for The Black Herald does not mirror this rather outlandish aim, its birth is, in some way, similar to the Blast one: a response to what has gone before. For me it certainly is, having tired of the insular and island-bound verbiage of my own country’s literary magazines and the secular way in which the majority of the ‘contributors’ have seemed at times ‘handpicked’. The ‘mainstream’ exists in all countries and cultures, but in England especially it has become something of a ghost-ship, one shipwrecked onto the rocks of its own self-delusion and mediocrity, completely unaware of its soon-to-be obsolete passengers. […]

There has always been something of an obsession between critics and readers on just what constitutes ‘modern’ writing, but modernity of course has not one birth-certificate, and each epoch continually fills in a new date and hour to constitute its own ‘birth’. Original writing is born of the stone-watch, for it has no birth or death, and it is hoped that the many writings in this magazine will remain ‘outside’ of any modish epoch. The ‘historicizing’ of literature, though it exists in all countries and languages, is not always helpful to the writer, and seems to be no more than a transient progression of the human consciousness, something merely to tether the reader to the frozen post of each existential ‘I’. To usher in the 20th century, Apollinaire cried: ‘‘À la fin tu es las de ce monde ancien’’, and in the end, yes, all of us grow weary of what has come before (even if the past remains unsurpassed by the future) and so when the 21st century awoke to the rubble (mostly) of the grandiose ruins of the failed utopias of the previous century (a regressive sensation of time that occurs in every new century), a new set of human minds became ready again to ‘assimilate’ its languages, to recreate that artificial memory that occurs in words, and in which most of us re-remember ourselves and our species on earth.

Science and technology have progressed many aspects of what it means to be human, but neither have the ability to alter the natural consciousness of being alive; even in the worst of times it is the writer, neither conscious of himself or what he writes, who ‘progresses’ the human mind the most, and when ‘being alive’ is as precarious and as chimerical as it is in today’s world it can often fall onto the shoulders of the writer to confirm Shelley’s declaration that poets and writers are ‘‘the true legislators of their time’’. Every age holds on to something of ‘‘an hallucinatory image of itself which persists until it has been dispelled by other, alternative events,’’ (John Gray), ‘events’ in language mostly that I am confident the reader will find in the following pages. » 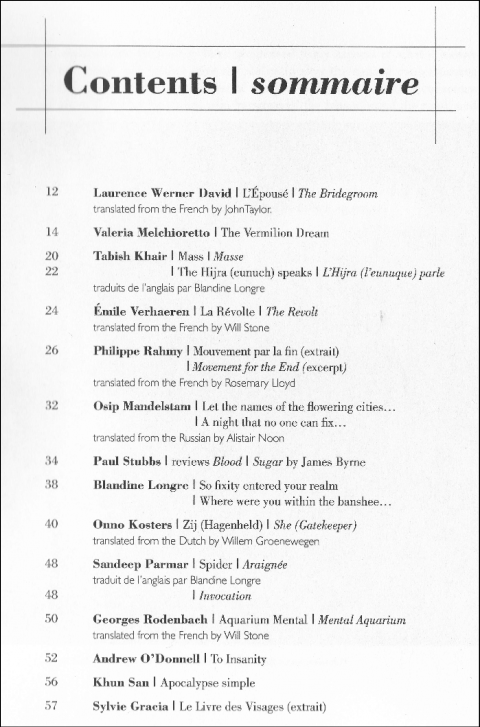